Thanks to random internet strangers, you can also read this post in: Russian

Finding the median in a list seems like a trivial problem, but doing so in linear time turns out to be tricky. In this post I’m going to walk through one of my favorite algorithms, the median-of-medians approach to find the median of a list in deterministic linear time. Although proving that this algorithm runs in linear time is a bit tricky, this post is targeted at readers with only a basic level of algorithmic analysis.

The most straightforward way to find the median is to sort the list and just pick the median by its index. The fastest comparison-based sort is \(O(n \log n)\), so that dominates the runtime.12

Although this method offers the simplest code, it’s certainly not the fastest.

Finding the median in average O(n)

Our next step will be to usually find the median within linear time, assuming we don’t get unlucky. This algorithm, called “quickselect”, was devevloped by Tony Hoare who also invented the similarly-named quicksort. It’s a recursive algorithm that can find any element (not just the median).

Here’s an example of the algorithm running on a list with 11 elements:

To find the median with quickselect, we’ll extract quickselect as a separate function. Our quickselect_median function will call quickselect with the correct indices.

Quickselect excels in the real world: It has almost no overhead and operates in average \(O(n)\). Let’s prove it.

On average, the pivot will split the list into 2 approximately equal-sized pieces. Therefore, each subsequent recursion operates on 1⁄2 the data of the previous step.

There are many ways to prove that this series converges to 2n. Rather than reproducing one here, I’ll just direct you to the excellent Wikipedia article about this specific infinite series.

Quickselect gets us linear performance, but only in the average case. What if we aren’t happy to be average, but instead want to guarantee that our algorithm is linear time, no matter what?

In the section above, I described quickselect, an algorithm with average \(O(n)\) performance. Average in this context means that, on average, the algorithm will run in \(O(n)\). Technically, you could get extremely unlucky: at each step, you could pick the largest element as your pivot. Each step would only remove one element from the list and you’d actually have \(O(n^2)\) performance instead of \(O(n)\).

With that in mind, what follows is an algorithm for picking pivots. Our goal will be to pick a pivot in linear time that removes enough elements in the worst case to provide \(O(n)\) performance when used with quickselect. This algorithm was originally developed in 1973 by the mouthful of Blum, Floyd, Pratt, Rivest, and Tarjan. If my treatment is unsatisfying, their 1973 paper will certainly be sufficient. Rather than walk through the algorithm in prose, I’ve heavily annotated my Python implementation below:

Let’s prove why the median-of-medians is a good pivot. To help, consider this visualization of our pivot-selection algorithm:

The red oval denotes the medians of the chunks, and the center circle denotes the median-of-medians. Recall that we want our pivot to split the list as evenly as possible. Let’s consider the worst possible case – the case where are pivot is as close as possible to the beginning of the list (without loss of generality, this argument symmetrically applies to the end of the list as well.)

Consider the four quadrants (which overlap, including the center column (when the number of columns is odd) & middle row):

Out of these four two quadrants are useful because they allow us to make assertions about their contents (top left, bottom right) and two are not (bottom left, top right).

Now lets return to our original task, finding the worst possible case where our pivot falls as early in the list as possible. As I argued above, at a minimum, every item in the top left is strictly less than our pivot. How many items are there as a function of \(n\)? Each column has 5 items, of which we’ll take 3; we’re taking half of the columns, thus:

But is dropping 30% of the elements at each step sufficient? It’s worse than the 50% we achieved in the randomized algorithm. At each step, our algorithm must do:

This yields the following equation for the total runtime, \(T(n)\):

In the real world, selecting a pivot at random is almost always sufficient. Although the median-of-medians approach is still linear time, it just takes too long to compute in practice. The C++ standard library uses an algorithm called introselect which utilizes a combination of heapselect and quickselect and has an \(O(n \log n)\) bound. Introselect allows you to use a generally fast algorithm with a poor upper bound in combination with an algorithm that is slower in practice but has a good upper bound. Implementations start with the fast algorithm, but fall back to the slower algorithm if they’re unable to pick effective pivots.

To finish out, here’s a comparison of the elements considered by each implementation. This isn’t runtime performance, but instead the total number of elements looked at by the quickselect function. It doesn’t count the work to compute the median-of-medians. The point of this graph is not to demonstrate that median-of-medians is a good algorithm, but rather to demonstrate that it’s an effective way to pick pivots. 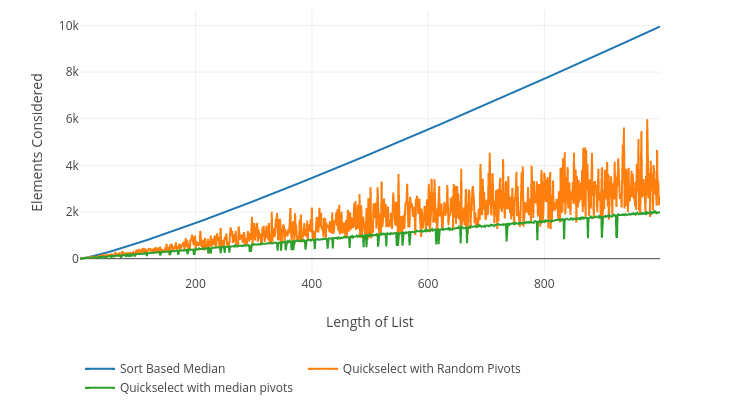 It’s exactly what you would expect! The deterministic pivot almost always considers fewer elements in quickselect than the random pivot. Sometimes we get lucky and guess the pivot on the first try, which manifests itself as dips in the green line. Math works!

P.S: In 2017 a new paper came out that actually makes the median-of-medians approach competitive with other selection algorithms. Thanks to the paper’s author, Andrei Alexandrescu for bringing it to my attention!

Thanks to Leah Alpert for reading drafts of this post. Reddit users axjv and linkazoid pointed out that 9 mysteriously disappeared in my example which has since been fixed. Another astute reader pointed out several errors which have since been resolved:

Want to get emailed about new blog posts? I post about once every few weeks on topics like databases, language internals and algorithms, and recently, deep learning. Do you want to hire me? I’m available for engagements from 1 week to a few months. Hire me!
#python
#algorithms