Even if you go to bed at 9, getting up at 5AM is hard. It’s always darker than you expect and it’s usually freezing. In any case, Calley and I crawled out of our respective vans at 5AM in the Tuolumne Meadows campground, shoveled down some cold cereal, and rolled out for the day’s objective, the West Ridge of Mount Conness. TM Herbert, legendary Tuolumne badass, described the climb as “2 Cathedrals stacked on top of each other.” Coincidentally, it also boasts an approach at least twice as long as Cathedral, with 2000 feet of elevation gain and 1200 feet of elevation loss all in 4 miles of cross country hiking with tricky route finding. The (extremely optimistic) guidebook suggests 3-5 hours. Needless to say, we felt we needed an early start.

We rolled out the east entrance of the park and headed up the road to Saddle Bag lake. The most direct start for the West Ridge Mt Conness starts at the Sawmill Campground, about halfway up the hill to Saddlebag.

Note for future climbers: The parking at Sawmill is for campers and will probably be full; the road has copious pullouts.

We started up the trail from Sawmill Campground around 6AM. After only about 5 minutes, however, you run into the day’s first and last crux: crossing a precarious set of logs and sticks over what was almost certainly a very cold stream. Though we stayed dry, our dry feet wouldn’t last long. The trail starts as a fire road then gets narrower and narrower as you head up the drainage. About halfway up, presumably as a side effect of the high snow levels, the trail turns into a swamp for about 100 meters. So much for dry feet. 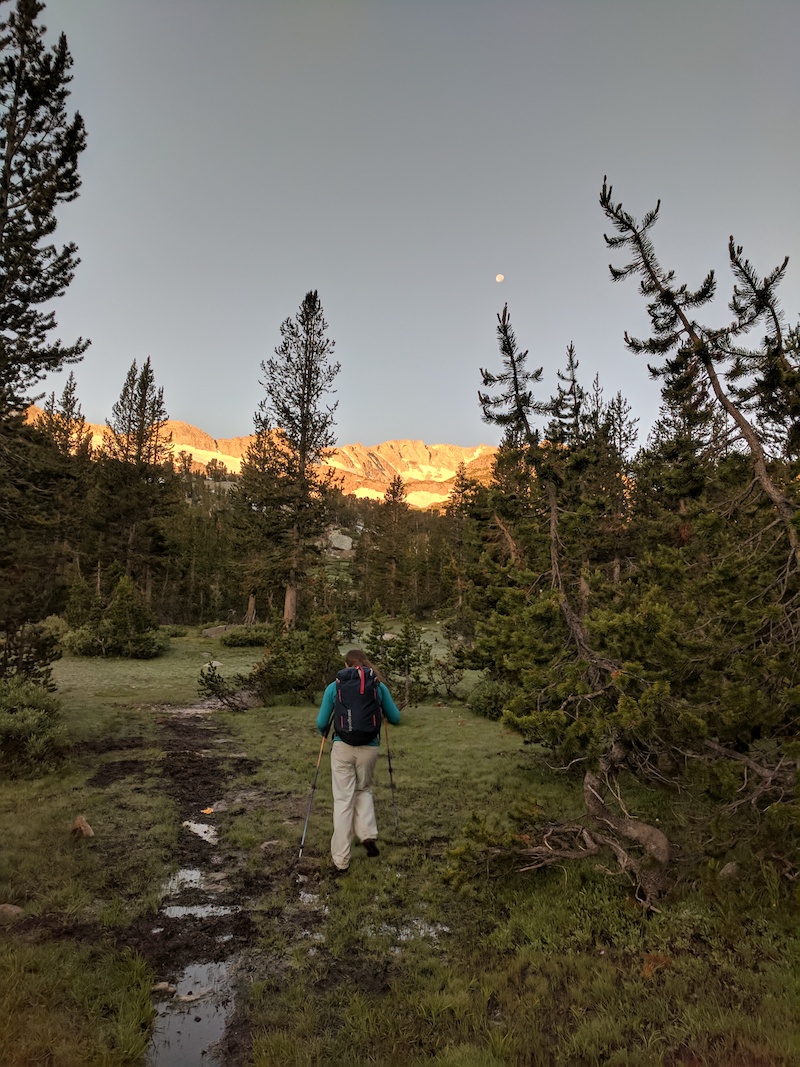 Just as we were beginning to get used the trail, it was time to leave and start wandering off trail up towards our objective. At this point we pulled out our cheat-stone for the day, an annotated GPX track for the approach. It would prove invaluable as the textual description of the approach would turn out to be somewhere between abysmal and useless. The approach climbs the rocky and grassy side of the canyon up towards a large waterfall. 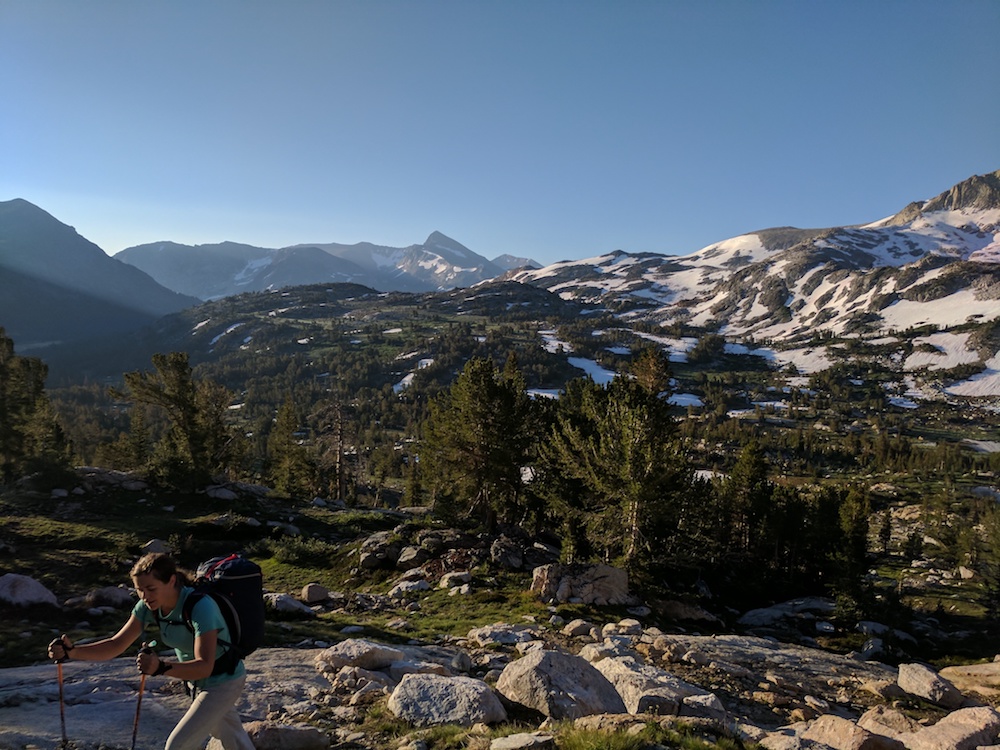 Then the approach literally goes up the waterfall. 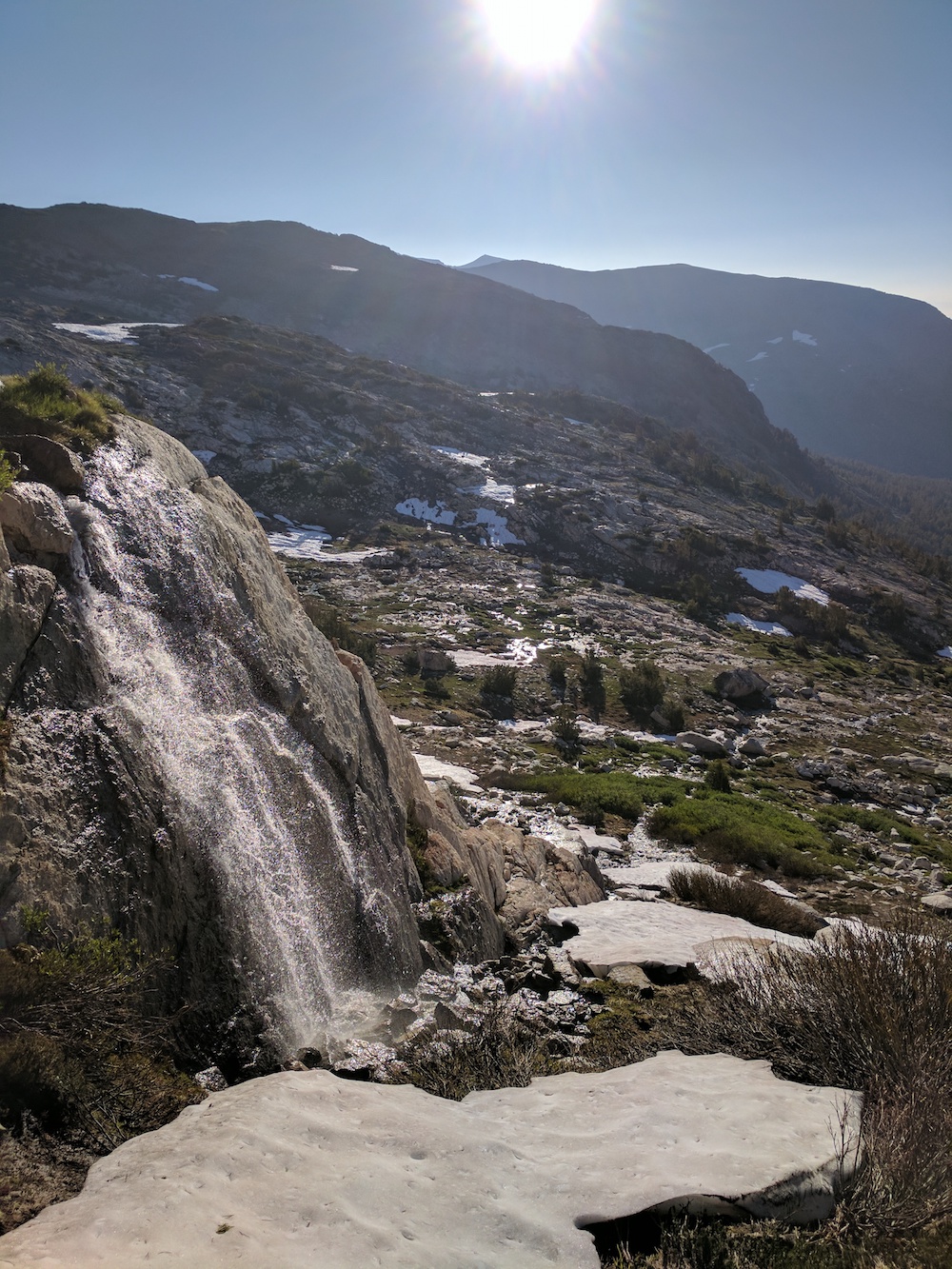 Although there was theoretically a 3rd class way to get around it, we didn’t find it (or it was covered in snow) and we ended up making some fifth class moves. Alas, the waterfall just hides another basin of similar size where you need to repeat the same procedure of crossing it, scrambling up the side, gaining the ridge, and making your way to the exit. 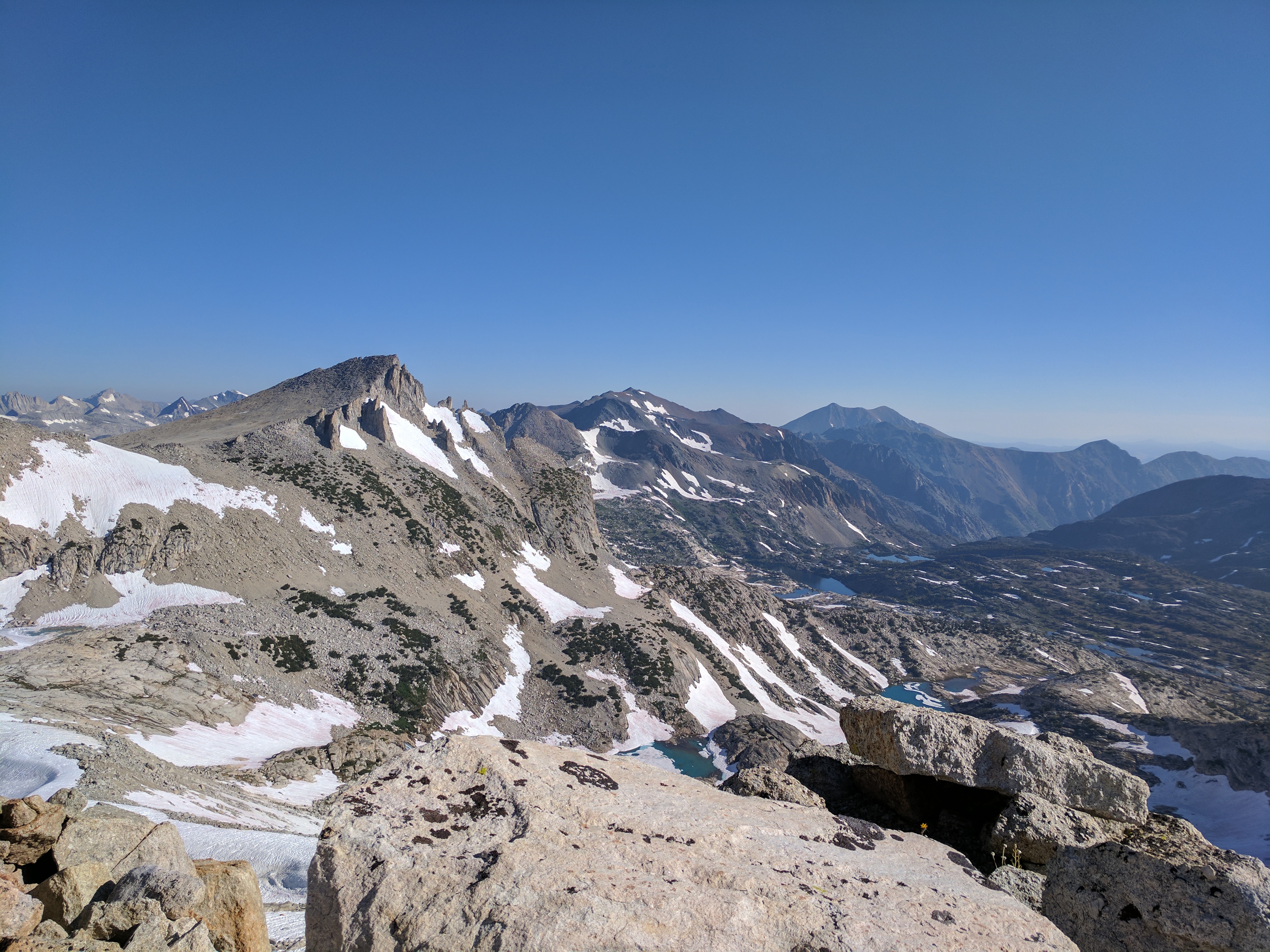 Finally at about 9AM we made it out of the upper basin at Mount Conness was finally in view. Unfortunately, from this angle, the summit is strikingly unremarkable, without much prominence. 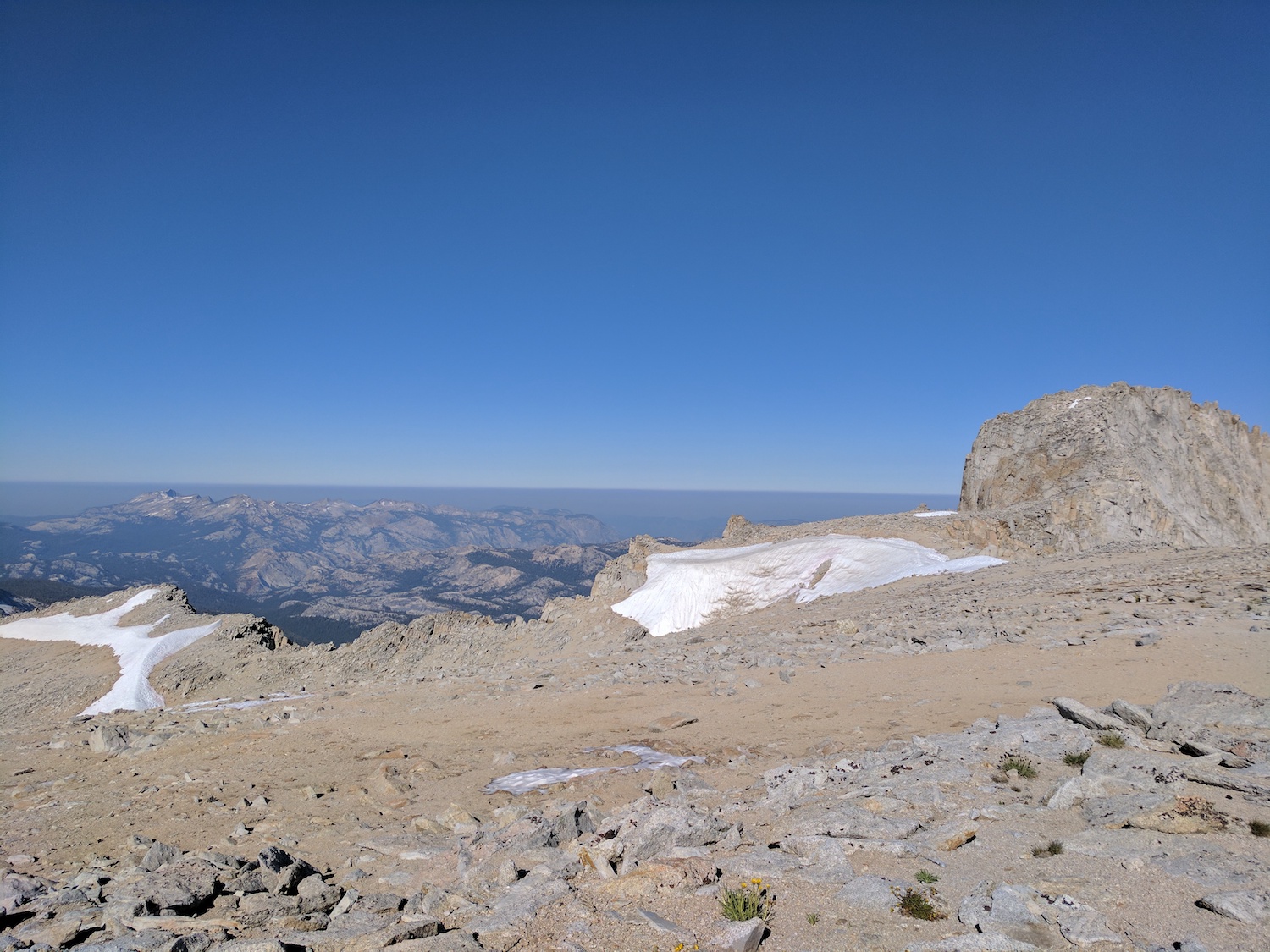 Now came the biggest bummer of this approach from the West Ridge: You walk all the way back down to the bottom of Conness to start the climb. A few fourth class moves down a gulley eventually lead to talus, which we crossed to finally get to the base of the climb at around 10:30. 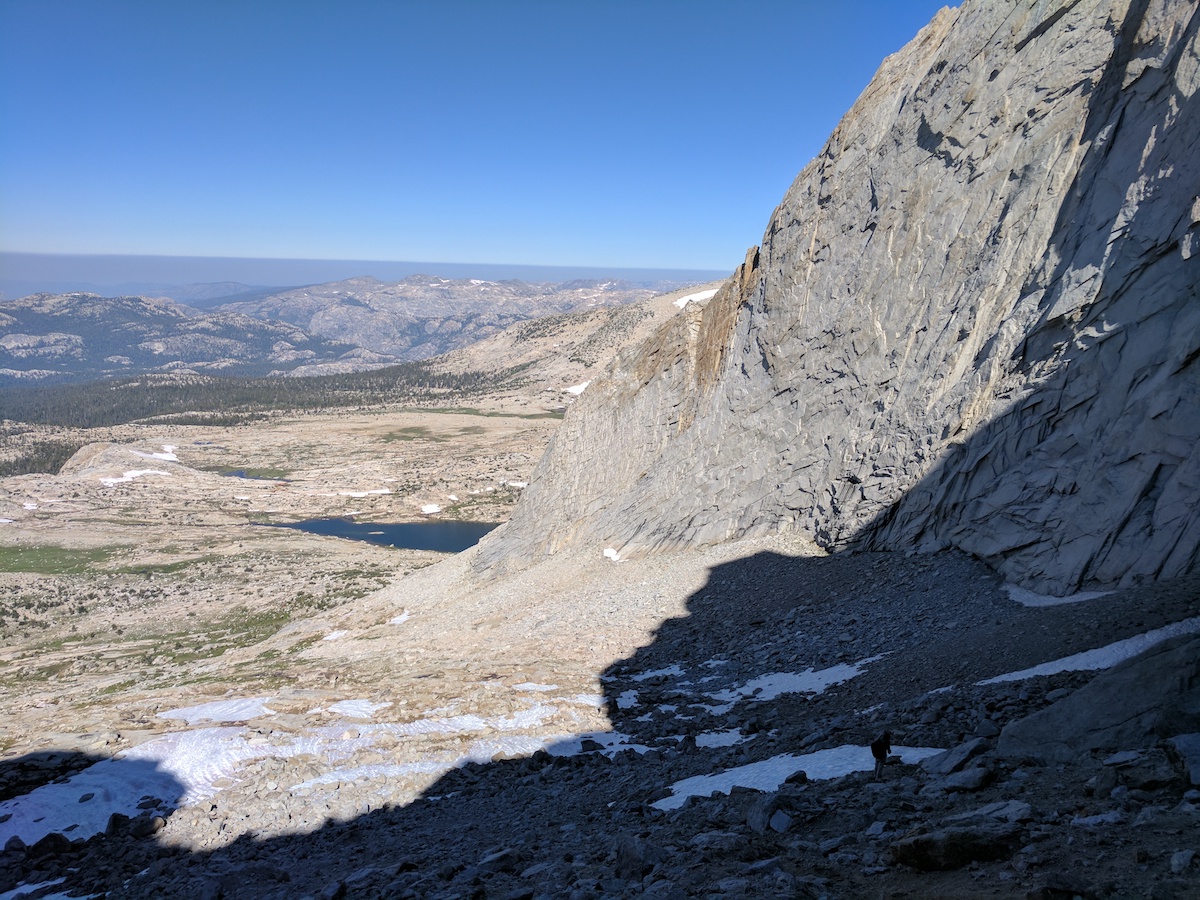 According to the guide book, the first 2 pitches are 5.6 and the remaining 8 are easier. I’m not sure we did a single 5.6 move on the climb, but there were definitely a decent number of real climbing moves on the upper pitches as well. I took the first block of simul-climbing and lead about a pitch and a half up the steepening granite ridge. 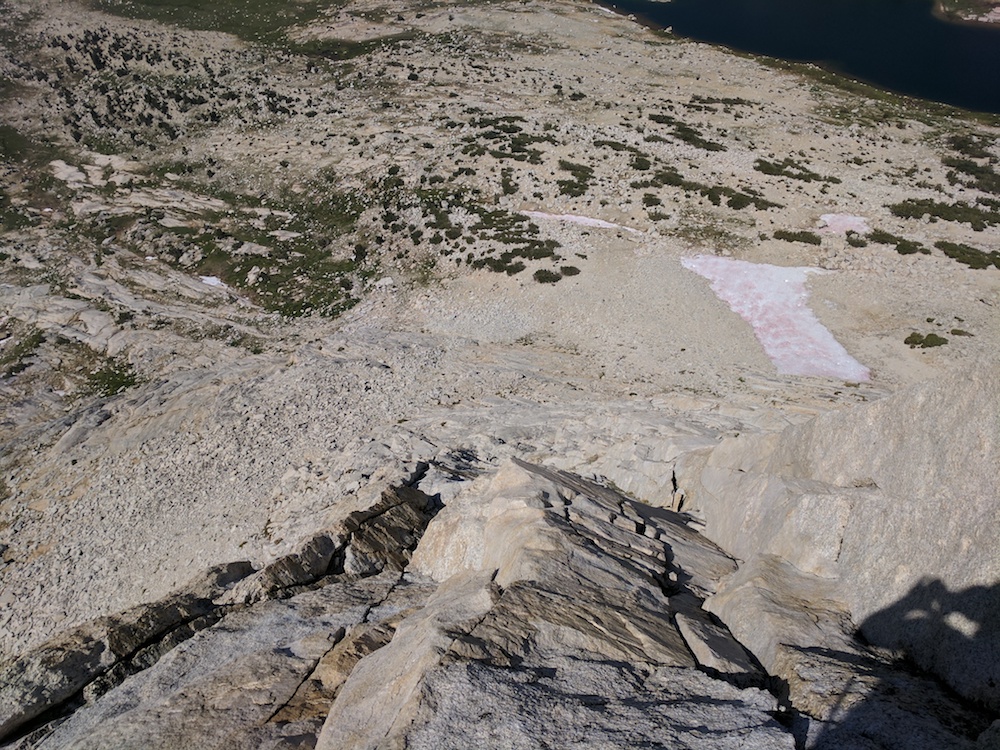 The climbing wasn’t especially challenging, but after all the traversing and downclimbing on Matthes Crest the day before I was just happy to be going up.

Calley took the second block, through an easy roof and across a wild knife edge ridge. 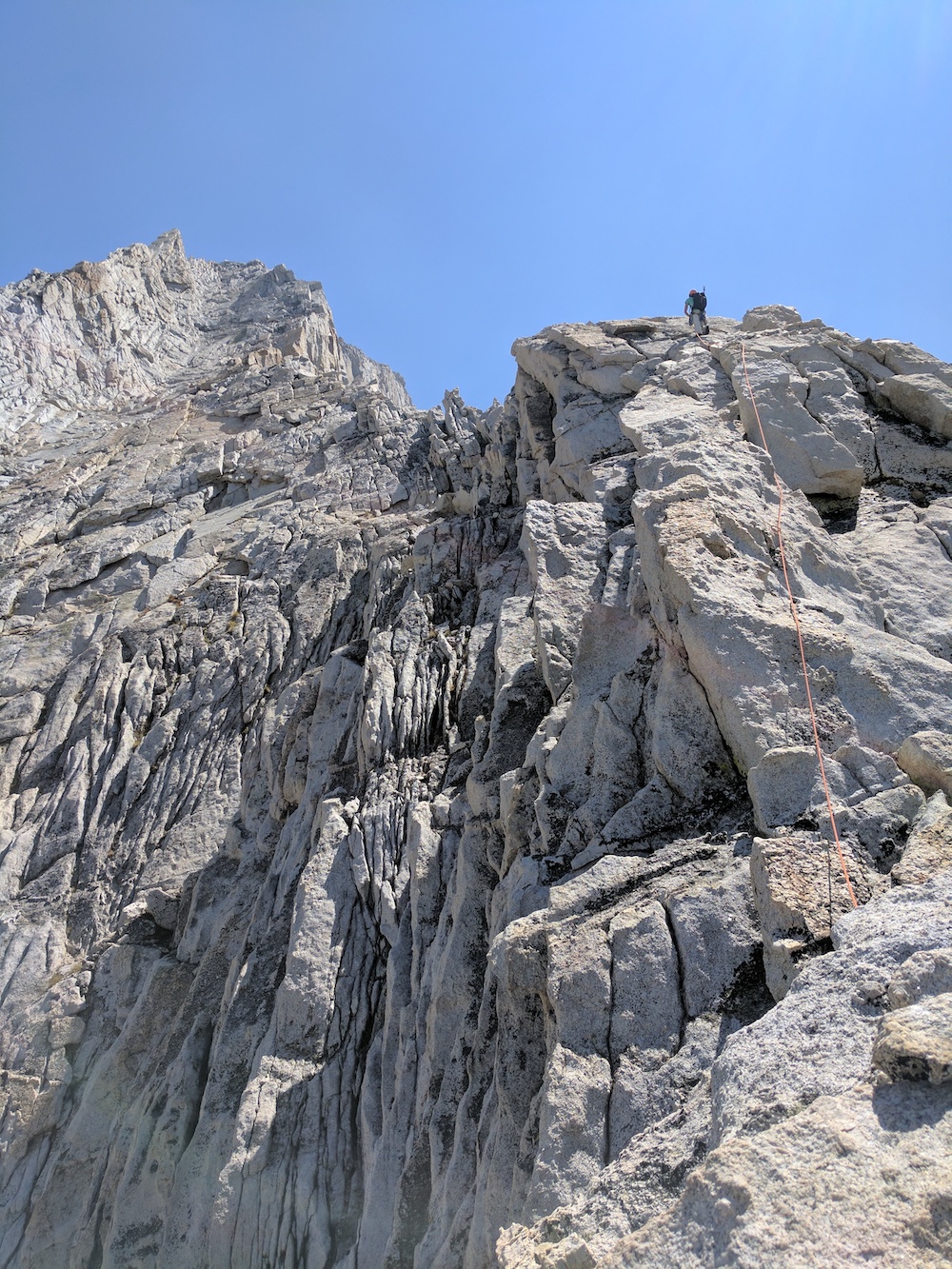 From here, I lost count of how many blocks we did, but the climbing was sensational, probably the most fun climbing I’ve done at the grade. The rock was generally great with wild exposure and nothing but smiles all the way to the summit. All told, it took us about 3 hours to do the 1500’ feet of climbing. 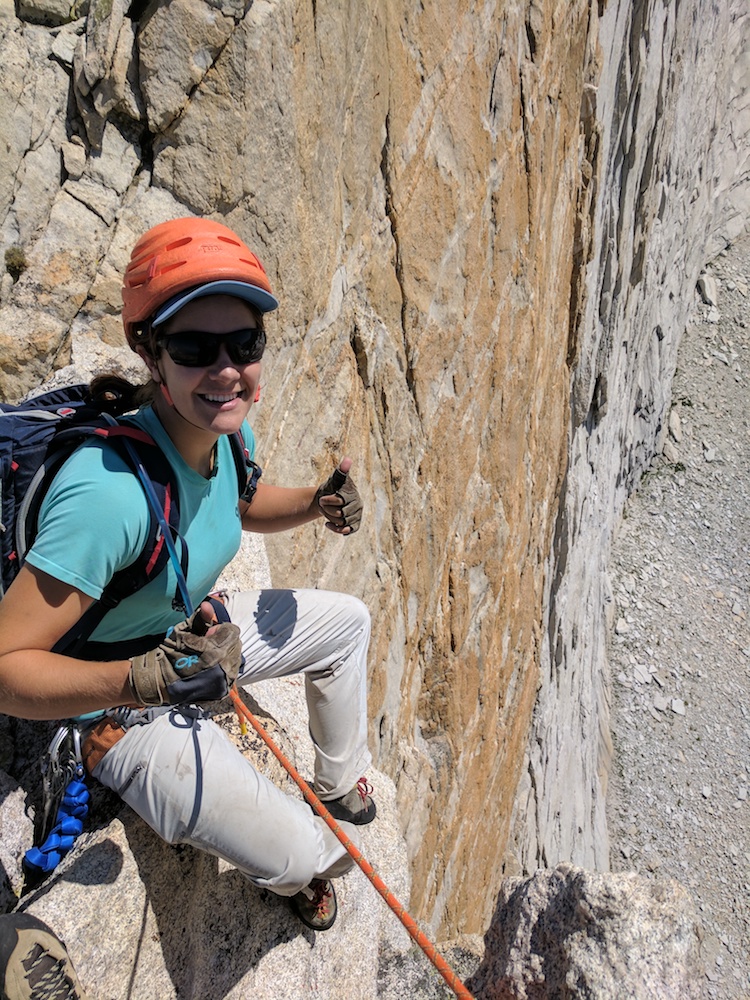 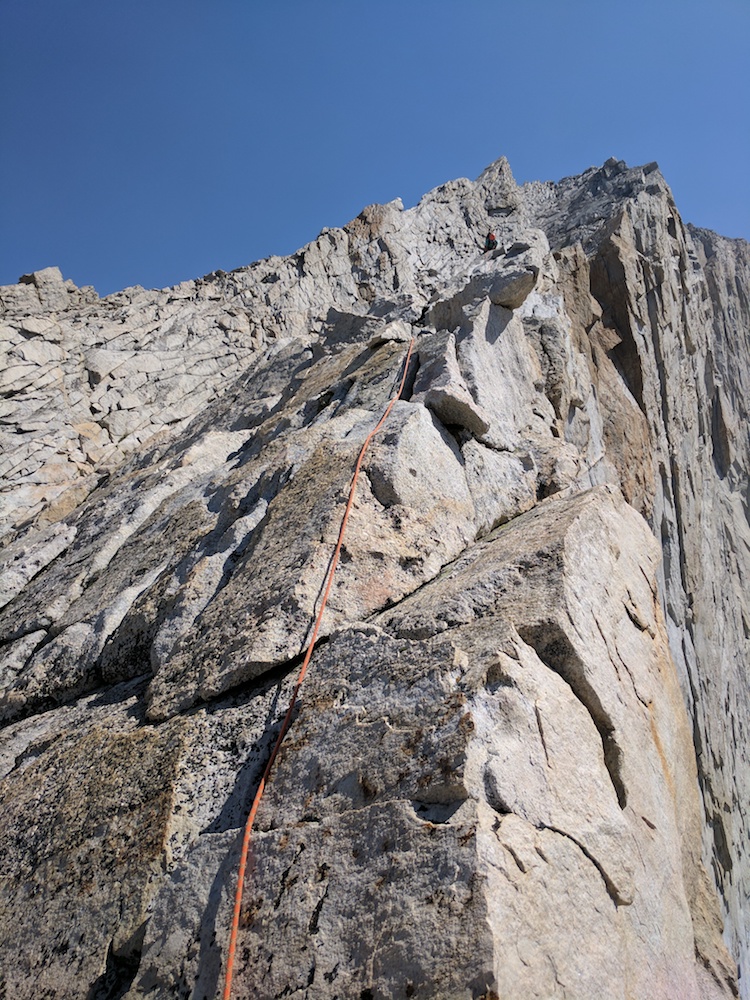 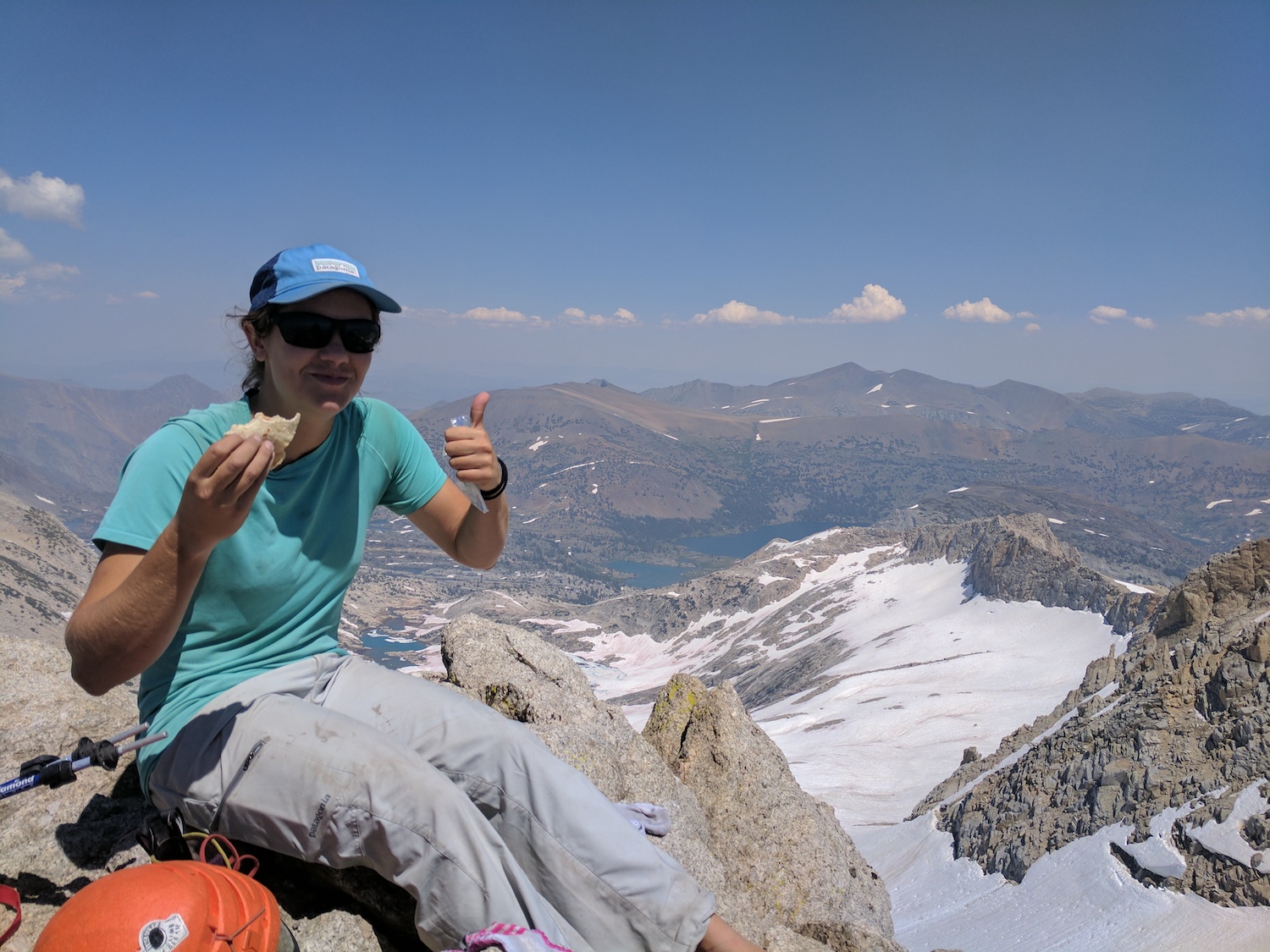 After enjoying our hard earned sandwiches we set about getting down. There is actually a hiking trail up to Conness which was straightforward but had some wild exposure that made it pretty spooky, especially when you aren’t tied in. 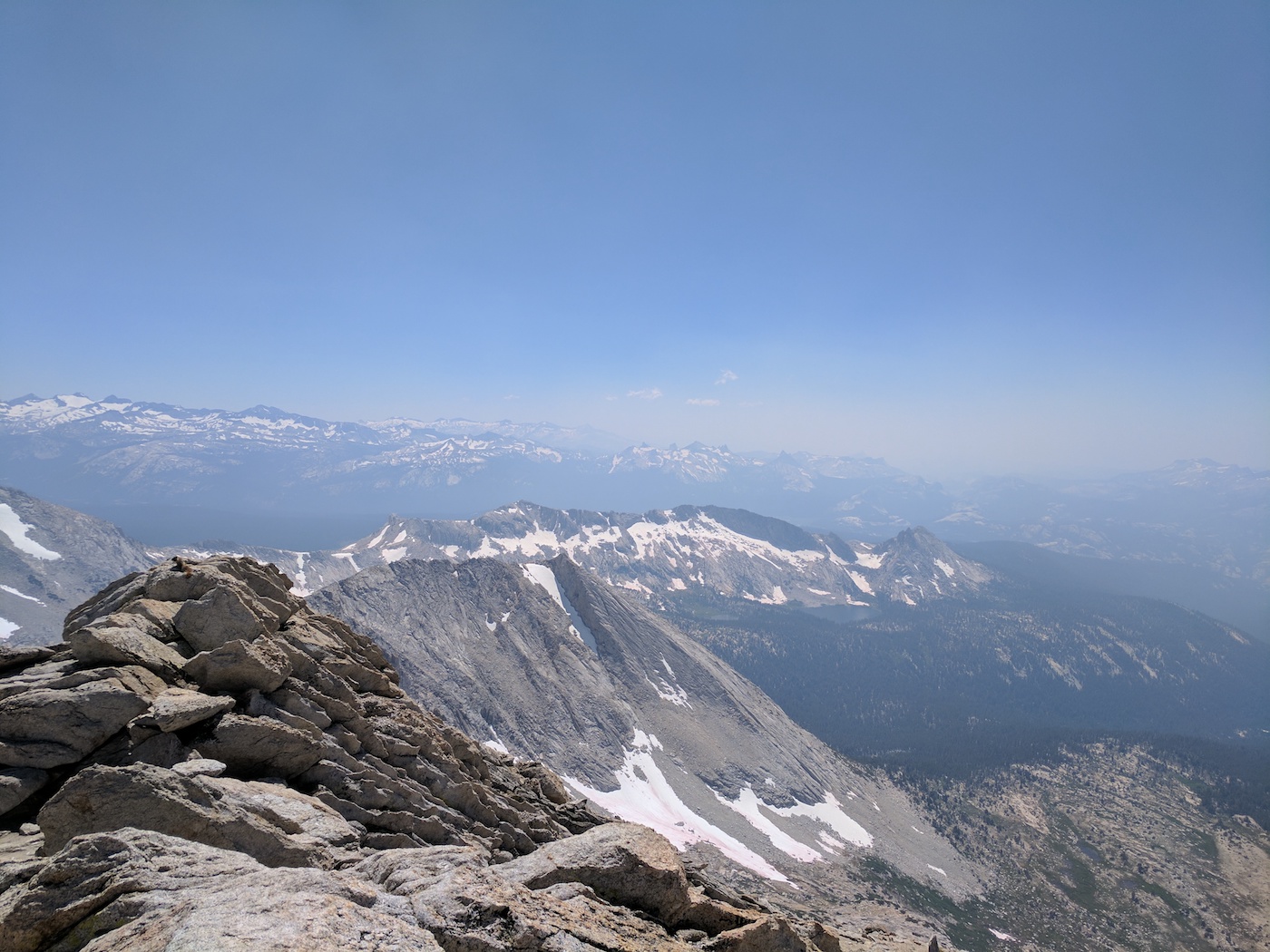 In the upper basin, the snow that plagued our ascent was now the perfect consistency to glissade down, saving our knees about 500 feet of descent.

It was uneventful from here, reversing the 5.6 move in the waterfall, getting swarmed by mosquitos, and finally crossing the precarious stream. We were back at the van by 4PM, just 10 hours after we started, and in plenty of time for a dip in Saddlebag Lake and a burger, fries, and softserve at the Tuolumne Meadows grill. My favorite day in rock in the Sierra and maybe ever: the hiking was beautiful and not nearly as sandy or talusy as the guidebook made it out to be. The climbing was superb, and really was like 2 Cathedrals on top of each other minus the awkward chimney. What more could you ask for?